I guess you can never really leave 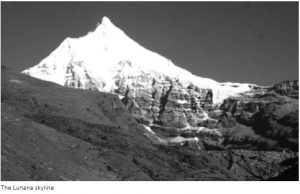 “Where are you from?” I am often asked.

That is what most people know of Bhutan. I’m pleased and also a little embarrassed at the same time. The aspiration of Gross National Happiness above Gross Domestic Product has defined Bhutan’s modernisation philosophy. And indeed we are a happy lot: we have no famine, no abject poverty and human misery you see in the urban slums that mar every rising city in the developing countries. We certainly don’t have senseless butchery from mindless wars and the perpetual leadership failures that leave  people in unending cycles of untold suffering and gross misery the world over. What is more, we are blessed by a rugged geography that does not yield much but protects us from the unexpected ravages of unpredictable natural disasters.  At the same time, however, how do I also tell those who think Bhutan is some sort of a Shangrila that the reality is often far from it?

Bhutanese, like others in the world, also aspire to modern comforts and wealth. In the country where one hears much about spirituality and abstention, sometimes god-men are more avaricious than the common man on the street, and sometimes what political leaders expound varies greatly from what they practise. Still, I’m proud that I have a country with a Monarch whose only interest is the welfare of the people, a populace largely innocent and happy with the simple joys of mundane everyday existence.

“How is it that Bhutanese are very good?” people ask when they talk to us. By good they usually mean our command  over the English language.

“We teach English from day one of school,” I say.

It is the English language proficiency that gives Bhutanese an edge over those whose education is mainly in their native languages.  How many Bhutanese realise that the astute decision by our beloved Third King, His Majesty, the late King Jigme Dorji Wangchuck, to switch from Hindi to English as the medium of our education system in the mid-1960s is what propelled Bhutanese onto the international arena so quickly. That wise decision strengthened further by the massive investment in education by our Fourth King, His Majesty Jigme Singay Wangchuck, now enables every Bhutanese to compete on the global stage with the world’s best despite the relatively brief period of modernisation of our country. But there are also those who believe that English is destroying our own language. And listening to our younger generation speak Dzongkha today I am left sometimes to believe that the conservatives do have a point. Therefore, while I’m proud to be a Bhutanese abroad, proficient in an alien language, I also wonder if we are making sufficient effort to preserve our own language and to teach our own children the nuances and the beautiful intricacies of Dzongkha as a language.

“Are you from the Royal Family?”

“No,” I reply, shaking my head at such a happy prospect.

“Then your parents must be rich or influential.”

They smile tolerantly and think I am joking. I don’t blame them especially after I have proudly told them of studying at some of the world’s best institutions. But inside I know fully well and I am grateful to the country that has nurtured me and enabled me to expand my horizons to become an international civil servant. It is in very few developing countries that the opportunities exist to give wing to the ambition of a person from a humble background to reach for the stars.

However, the times are changing even in Bhutan. The moans and groans of perceived injustices from the younger generation today can be seen posted across the social media. There is some truth in them perhaps, but there is also a lot of loose talk. I  wonder whether our younger generation  expects the pleasures of living a comfortable life without having to strive for it; in fact almost as a matter of right rather than an opportunity to prove oneself  to be deserving of those comforts. Too much comfort can take the competitive edge out of an individual. And that risks creating a generation of lazybones who only want to milk the state which strives to give them even more than they deserve.

Being a part of the diaspora is only an accident but being a member of the comity of international civil servants can be the real source of joy and pride. However, the world has become a more violent place and the destruction that violent conflicts brings with them, makes international work such as that of the WHO ever more needed and, at the same time, less and less effective as demand outpaces the global capacity to meet it. The mindless butchery by crazed zealots and the powerful ideologists who paint the world with death and destruction without sparing even women and children is now an almost every day fare. In a world so heartlessly violent, our country is a hidden gem of peace and tranquility. And that is what I miss most about my country when I am abroad.

I guess to receive something, one has to give something too.  Being a part of the Bhutanese diaspora expands the circle of  one’s physical universe but it also shrinks the personal space of family and native friends. The years of separation and physical distance gradually force you to build a world that becomes ever smaller and ever more distant from them. As one’s country grows more distant, one cherishes it even more. So the few rushed days of leave to go back home are never enough to take in the cool fresh air or admire the rugged mountainsides; it is certainly never enough to catch up with friends and relatives. Such vacations end far too soon. As the wings of Drukair slice the cold morning air, one  is  already planning one’s next visit. I guess one  can never really leave one’s  motherland.

About Author: Dr Pem Namgyal is the Coordinator of the Implementation Research team of the WHO’s Initiative for Vaccine Research at the WHO South-East Asia Regional Office in India. Before joining WHO in 2001, he worked for 15 years in Bhutan’s Ministry of Health.