Volume 8, Issue 2 of The Druk Journal titled Local Government was published in October 2022. The journal has 15 in-depth articles that look at different aspects of the emerging political intricacies in local Bhutanese politics. The volume covered topics ranging from reflection on the decentralised government, to engagement of community and perspectives on the role of Local Governments.

Copies of the issue have been distributed to more than 197 different academic institutions, ministries, political parties, constitutional bodies, schools across the country and the distribution continues. 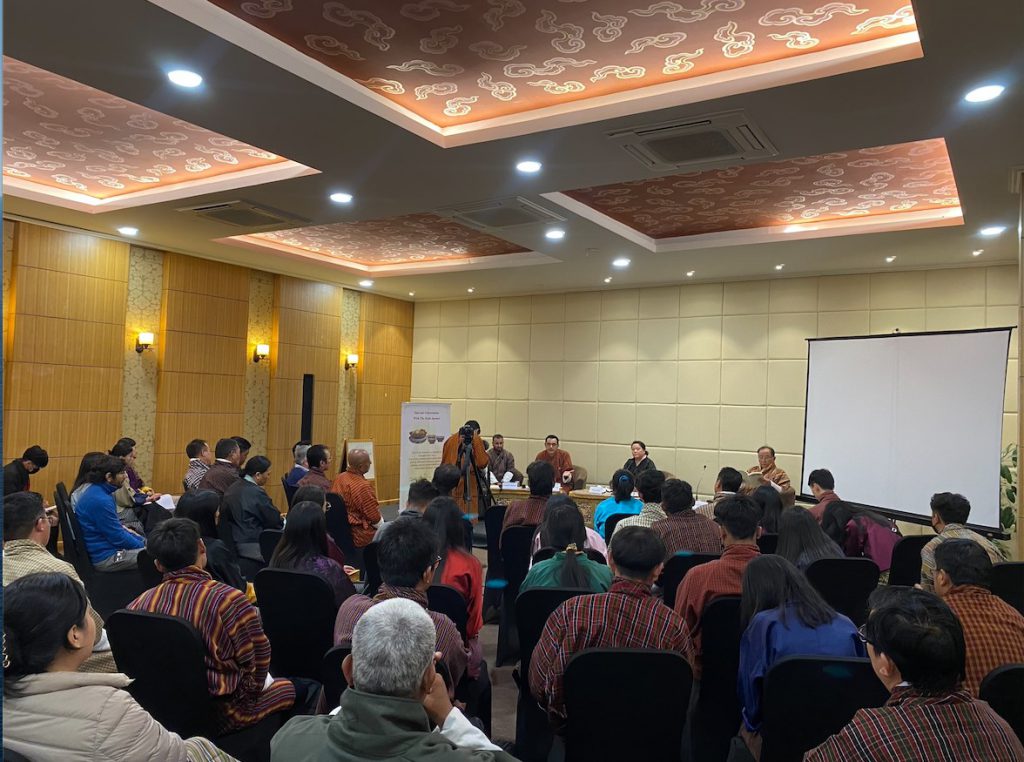 Three speakers who contributed articles to this issue of TDJ conversation presented ideas on reducing administration costs and increasing efficiency through merging of gewogs. The importance of the domestic tourism sector in merging with the local government to promote holistic and integrated area based development planning. A personal reflection on the experience of the decentralised government over the years. The session was moderated by the Editor of TDJ, Dasho Kinley Dorji.

Tashi Pem, country director of Helvetas, tackled the most contentious topic of consolidating Gewogs. She highlighted that while it appears cost effective and efficient to consolidate the Gewogs with improvement in road networks, information and communication technologies, cultural identity and traditions of the communities are an important factor in arguments against consolidation.

Dasho Kinley, the moderator noted that this is a fascinating debate and argument. He said “It addresses efficiency at the cost of culture, identity and tradition”.

Kinchho Tshering, a former media personnel, shared his views on how the local governments can play an important role in promoting  domestic tourism to ensure self-reliance and contribute towards nation’s development.

A government official pointed out that the Local Governments (LGs) need to make caretakers of monasteries and sacred sites more service-oriented and professional to promote domestic tourism. Extending the discussion further, Naro Gup remarked that the LGs should benefit from the sustainable development fund collection to improve public amenities (e.g. public toilets) if the LGs and the Gewogs are to invest in local tourism.

Rabilal Dhakal, a Lecturer at the Royal Thimphu College, shared how consensus-based community meetings in the past have now become political as Gewog people come together to vote out less preferred candidates. He also pointed out how aspiring candidates for National council and National Assembly make similar pledges that confuse people at the local level.

A college student in the audience asked, “What can we do if there is corruption during elections?”. Another student shared that “Most voters [of my age] aren’t aware and do not really care about politics” He questioned if giving voter cards at the age of 18 serves the purpose of democracy without educating the young people about politics.

Rabiala said “politicians aren’t inherently corrupt, it is the system”. There are individuals in politics who are genuinely there to serve people. He said voting has become “conditional”, people  ask “what will I get if I vote for you?”. There are times when people  are motivated to vote for a specific candidate for their personal gain and benefits. He shared that some people encourage corrupt practices and that is why politicians are forced to be corrupt. 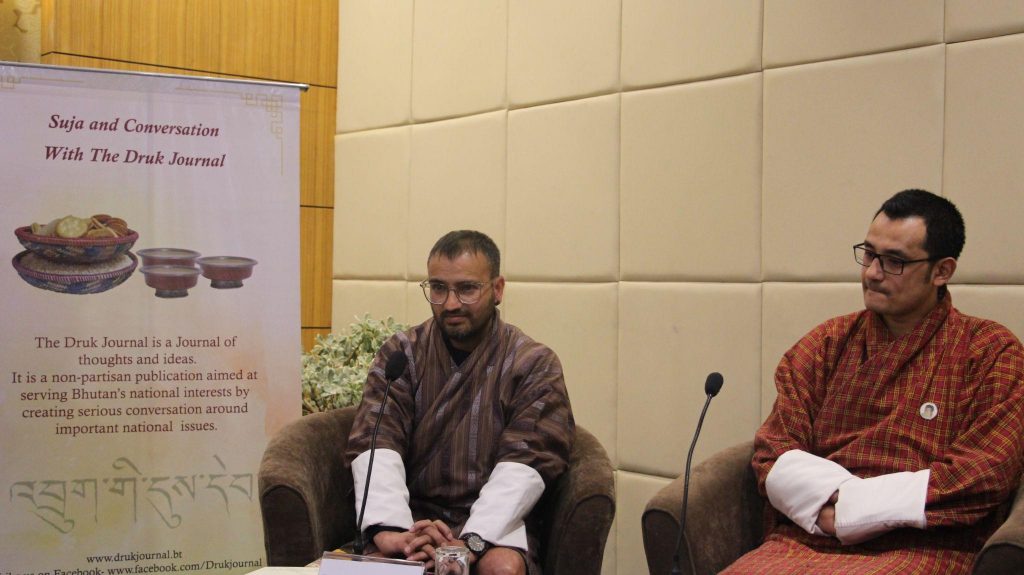 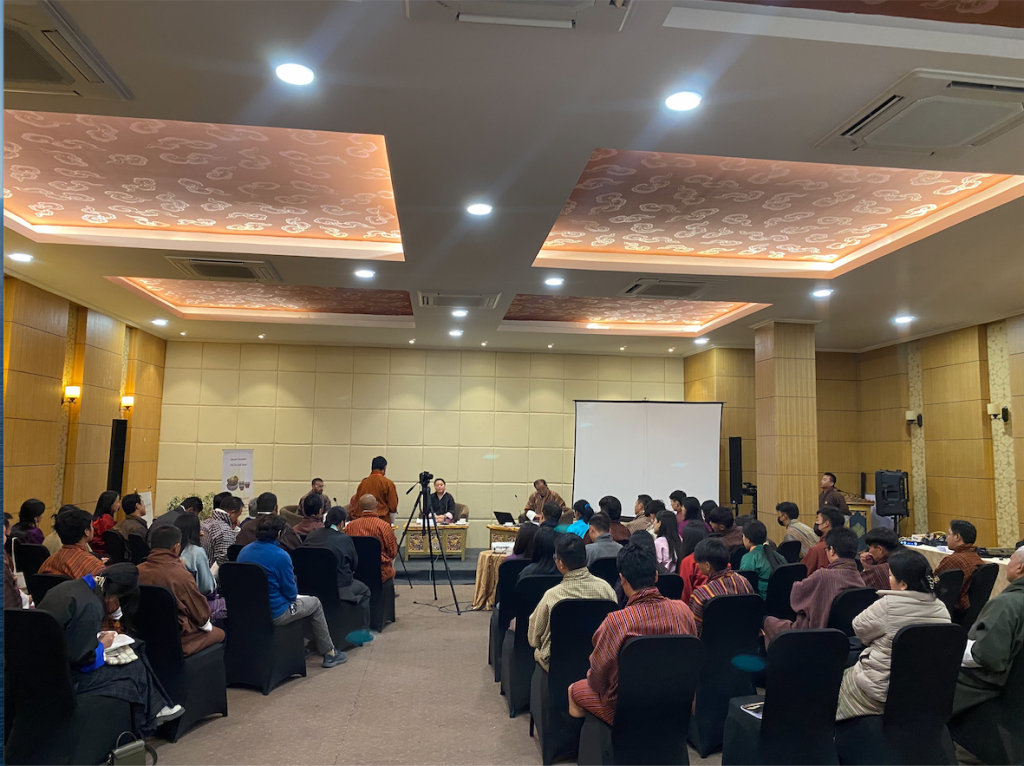 The conversation on 6th December, 2022 will soon be available on BCMD’s YouTube channel:

Volume 8, Issue 2 of The Druk Journal titled Local Government was published in October 2022. 600 copies of the journal were printed. The journal has 15 in-depth articles that look at different aspects of this emerging political intricacy in local Bhutanese politics. The issue carries three broad themes. Almost 207 copies of the issue have been distributed so far to more than 197 different academic institutions, ministries, political parties, constitutional bodies, schools and so on across the country. Distribution is ongoing.

The Journal’s website is a repository of all journals published since 2015. Share this link today with anyone who may wish to keep abreast of issues of importance to Bhutan. www.drukjournal.bt

We also have an FB page for quick updates: https://www.facebook.com/Drukjournal