The first Druk Journal conversation on the fall 2020 issue – Urban Bhutan – the Story was held on 1 December 2020. More than 22 participants were present at The Media Lab, which included the current and former Thimphu Thrompons, urban planners from the Ministry of Works and Human Settlement (MoWHS), Thimphu Thromde (City Corporation) and private design firms, members from the political parties, architects, development partners and the media. More than 100 students and faculty members from the College of Science and Technology (CST) also joined us via Zoom.

Three speakers who contributed to the issue of The Druk Journal spoke on the rapid urbanisation of Thimphu, failure of implementing the Thimphu Structure Plan (TSP), the need for community participation in the development process, and the need for more healthy public sports and recreational facilities in towns and more. The session was moderated by the Editor of The Druk Journal, Dasho Kinley Dorji. 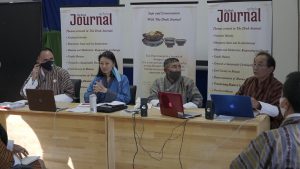 Meghraj Adhikari, the first professional Bhutanese urban planner, began by talking about the need for balanced urban development as the focus is usually on hard infrastructure such as roads but the need for people-centric designs and amenities (parks, community centres etc.) are just as important. Though plenty of resources have been used to create the TSP, not enough resources are allocated to implement these developments. He said that implementation was usually a hurdle with influential individuals choosing to benefit from land use with the public receiving the short end of the stick.

In addressing the failure of proper implementation of the TSP, Meghraj highlighted co-ordination amongst relevant authorities was a problem with most organisations choosing to work in silos. As the plans are not fully recognised by law, there is no requirement to fulfil the proposals and changes to the plans can be made without requiring the Thrompon’s approval. He suggests that plans made are still relevant and can be achieved provided they have proper financial resources.

The second speaker, Siok Sian Pek-Dorji, an editorial member of The Druk Journal, spoke about the importance of the development process to be inclusive with wide consultations and engagement of end-users in the planning and design process. Siok Sian also introduced initiatives of the Bhutan Centre for Media and Democracy’s Building Community projects that took place in Paro and Samdrup Jongkhar where town committees were created with members from government, CSO’s, youths, schools, citizens and others to envision a vision for their town. The projects were successful in developing local projects that the community was passionate about such as a library or volleyball ground. She stated that it was easy to forget about communities and create towns filled with infrastructures with little consultation with people.

Dasho Thrompon agreed and stated that towns have enough hard infrastructure – there is adequate water supply and road connections – but we’re missing the softer component of cooperation amongst the community. The focus needs to be redirected to creating better open spaces and parks, with walking and jogging trails for citizens as Siok Sian stated there is a lack of healthy alternatives in urban towns which tend to focus on nightlife and night entertainment thus leading to unhealthy lifestyles. Although efforts are being made to open more futsal and basketball courts, using government land for such developments needs the approval of the Land Commission as Thromde has no control over land assets. Siok Sian pointed out the need for more healthy public facilities to make them more accessible and affordable to people especially youth.

Tashi Penjor, the Chief Urban Planner from MoWHS spoke about how the introduction of the zoning system during lockdown is paving the way for urban planning and development in Thimphu as well as the rest of the Dzongkhags across the country. He stated that the zoning system was an effective tool of revitalising neighbourhoods and they hope to create self-contained and self-sustained villages which would also ease the pressure in case of another lockdown. He also spoke about the introduction of a digital platform to navigate the issue of a street address system, whereby people can use their phones to locate shops etc. which will ultimately be handed over to Thimphu thromde to implement, manage and update.

Jigme Thinley, a lecturer at CST and a contributor to the Journal spoke about the lack of proper policies and core coordinating agencies at a national level in dealing with issues of housing and urban development. He talked about the unsustainable use of government land and rental unaffordability in Phuntsholing. In Phuntsholing, the market is driven by private developers as they provide 68% of housing, thereby inflating the market. The case is opposite in Vienna with the government providing 60% of the housing and also in Singapore with 78% of housing provided by the government. This makes it so that rent is controlled and they can build flats on vacant land. However, individuals in Phuntsholing spend 45% of their income on housing – breaching the international threshold of 30%. He suggests involving private developers in providing affordable housing solutions as it is evident that by corporatising housing, a profit making agenda overrides the social agenda of providing affordable housing to the needy. He also suggested creating a Central Coordinating Agency to create proper policies and to boost the housing delivery system while also ensuring government land is used as a tool geared towards innovative solutions.

Although the example of Vienna and Singapore is captivating, the same cannot be said for Thimphu. Dasho Thrompon argued that the setup in Thimphu is the reverse with 80% of the land being owned by private individuals, making it difficult to implement the local area plans no matter how good they are, making it a primary reason why the TSP was not successful. Dasho Thrompon also noted the importance of including the citizens in town development but stated public consultations are rarely successful due to low participation or lack of cooperation on issues such as land pooling.

The high rate of rural-urban migration was unforeseen, but now that it’s happened, the pressure is on the Thrompon to provide them with space; is there a possibility to reverse rural-urban migration, which could slash Thimphu’s population was a question from Karma Loday from Bhutan Kuen-Nyam Party (BKP). Phuntsho Wangdi, former Thimphu Thrompon, said it’s impossible to reverse rural-urban migration and urban development and the only way forward is to reduce mass migration. The only way it can be reduced is by improving the quality of services (health, employment, connectivity, etc) in rural villages, which gives them incentives to stay in their villages. 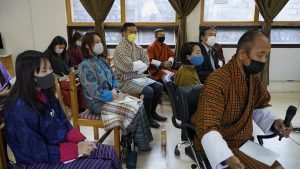 Karma Loday asked why buildings in the city were not allowed to go upto 10 stories as was recommended by the World Bank, which could accommodate more people and help address the increasing rate of migration. However, Thrompon addressed the issue of wanting to control population density and that providing space also means increasing pressure on water supply, road networks, waste management services and more. Individuals want to maximise their benefits and build tall buildings but don’t think about the repercussions of such actions.

Rebecca Gurung, an architect representing the Bhutanese Institute of Architects, said that there has been an emergence of billboards across Thimphu towns which was a “war against traditional Bhutanese facade”. She said they do not follow the special guidelines on retaining traditional Bhutanese elements in design and with each design being scrutinised by the Thromde, how were designs without these guidelines in mind being approved?

Tashi Penjor also addressed the need for having a proper legal and institutional framework in place, which clearly outlines what policies, strategies, plans and programmes to pursue. Not having this framework in place causes issues from planning proposals, preparation to implementation. This legal framework would also ensure timely resource mobilisation and equitable distribution and allocation of resources. He said that there was also a systemic flaw in service provision as thromde does not have control over all the services as they do in other countries. Services aren’t provided by an integrated local government and so having different agencies responsible for different services creates a gap causing inefficiency. 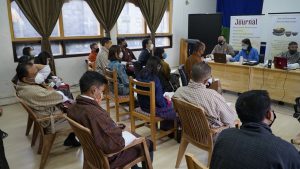 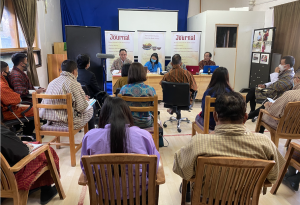