Volume  8, Issue 1 of The Druk Journal titled Democracy Today was published in May 2022. The Journal has 15 articles that look at the situation of democracy in Bhutan after 14 years of democratisation and three governments. The issue carries three broad themes. There are 700 hard copies of the journal, and more than 200 copies of the issue have been distributed so far to more than 197 different academic institutions, ministries, political parties, constitutional bodies, schools and so on across the country. Distribution is ongoing (check www.druk journal.bt). 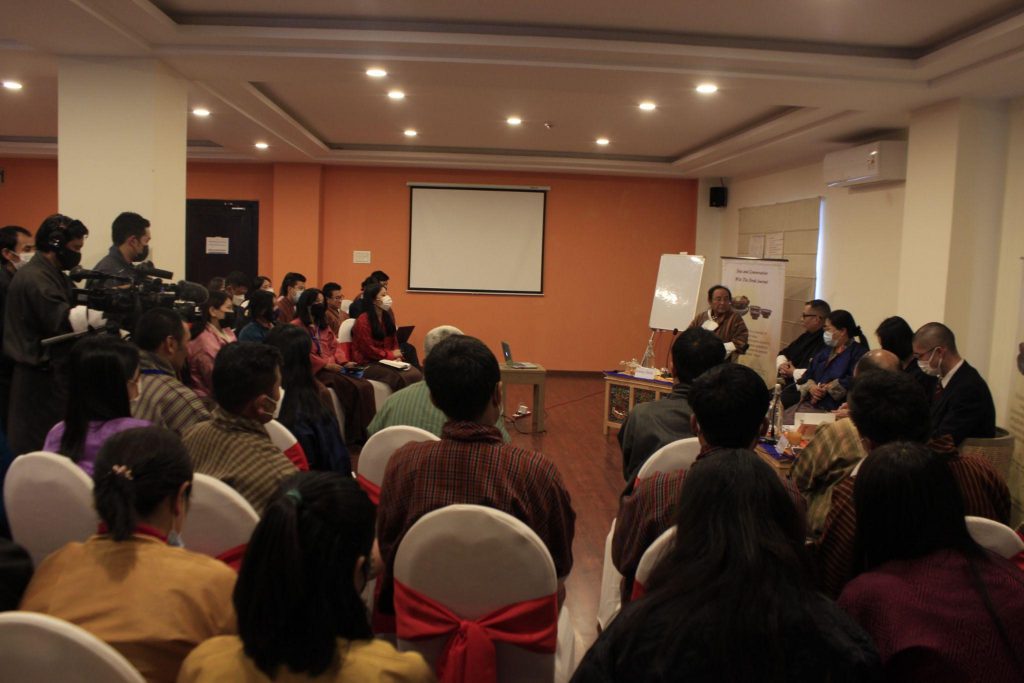 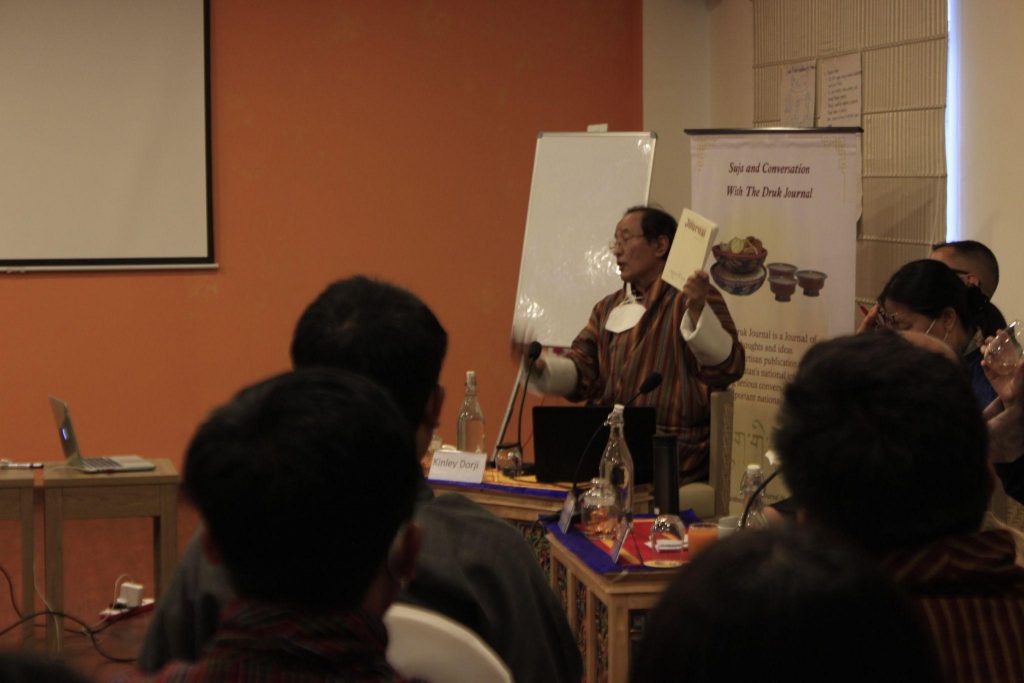 Two Conversations of the Druk Journal (TDJ) on “Democracy Today”, was held on 6th May and 1st June, 2022 moderated by the editor of the Journal, Dasho Kinley Dorji. The volume covered topics ranging from democratic culture, electoral processes to the experiences and perspectives of politicians, voters and the media in  democratic governance.

Project Formulation Adviser at JICA Bhutan Office, Shin Suto, said that democracy is a means to realise GNH but democracy is facing challenges. The number of women in parliament in Bhutan increased from 8.3% to 15.2%. However, this was far below the global average. Shin questioned if  all voices were equally heard?.

Principal Education Monitoring Officer (EMO), Rinzin Wangmo pointed out the need to step up civics education. Students are learning more from social media than from home and school. Civics textbooks focused  on “procedures and institutions” and less on Citizenship. Rinzin said that we should “Equip the young to respond to change”.  Moderator Kinley Dorji added that, for sections of the society , the word “youth” is linked to “problems” because of the lack of understanding. It is critical to enable youth to become active citizens.

When asked about the irony among civil servants remaining apolitical and also making democracy a way of life, founder and adviser at BCMD, Siok Sian Pek- Dorji stressed the need to maintain neutrality in politics and being non-partisan as public servants, but still get to make your voice count by voting during elections. Politics should be acknowledged as everyday action. Regardless of age, people should be educated more on the idea of politics and how it functions.

Kecho Pelzom, an International Relations Manager at RTC, discussed parallel values, meritocracy and social justice. Meritocracy draws on the idea that we are born equal but it is based on competency. While social justice is the distribution of income and opportunities.

Kencho emphasised  the importance of these values cohabiting but being less functional in reality from her analysis. Bhutan’s idea of social justice is distinct, as our welfare schemes mainly focus on uniformity but overlook the vulnerable population. She  questioned: “Do you want to look at democracy from a GNH perspective and how can we set up policies and structures that are useful to us?”.

Gumbo Sithey, founder of The Centre for Research Initiatives, shared his views on how during the pandemic some of the world leaders capitalised and entrenched their power. He pointed out the top down approaches to decisions made during the lockdowns as something that people should reflect on. He also touched on the freedom and importance of Media and the effect of digital platforms on news and information shared.

Chief Resource Officer for Bhutan National Bank speaking in his own capacity as contributor, Om Nirola talked about his personal reflection as an active participant in democracy. He shared about  democracy at home and the active participation of family and friends. He said that there was high voter turnout over the years but believes that there is still a large population in the country who  do not vote. He pointed out the need to  create awareness among people about the importance of citizens being able to choose the people who will run their government. He stated “Everyone knows who we should be voting for but no one knows who that everyone is”.

Dasho Kinley, addressed the current concern of the country, as young citizens leaving in search of the “Australian dream” and losing young voters and democrats. The discussion was further expanded, as the audience remarked on their fear and concerns regarding protest and  restriction and how this affects the culture of Democracy. The respect for authority eroded with democracy and defying the traditional culture of respect.

Responding to a question from the audience  about protests being a part of democracy, Pek Dorji spoke about how manifestation of democracy has to be  culturally appropriate. She highlighted the importance of collective action that is not only about protests but in being able to reach out to policy makers to share concerns, as simple as getting in contact  with our MPs. Kencho added that there are always other ways, such as signing petitions. Om Nirola stated that democracy has many manifestations and social media is emerging as a platform for citizens to be heard. Dasho Kinley highlightend the centrality of “skillful means” as a way to   exercise voice and to bring changes in the society or policies.

A student shared his perspective on Bhutanese citizens not being able to think for themselves and participate in decision making. He talked about the importance of democracy starting at home and how parenting can promote or stifle independence and independent thinking in children.   Pointing out the need to translate aspirations into action, Kencho Pelzom remarked that  “People want to talk about a lot of things, but won’t take action”. 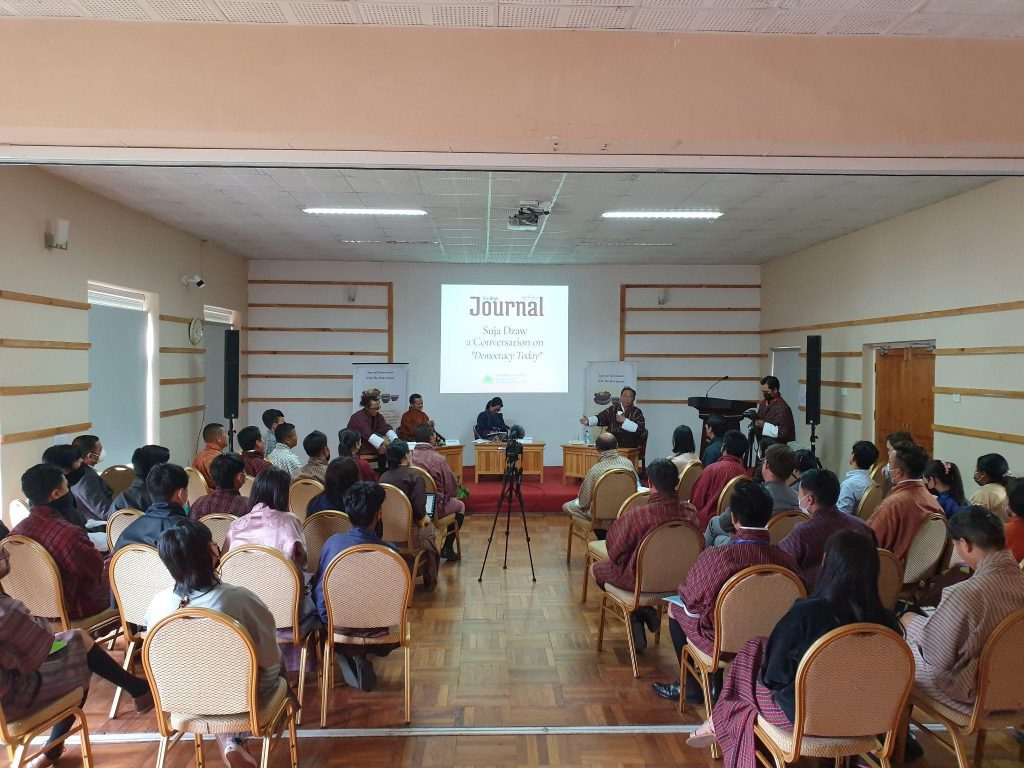 In a de-briefing on the conversation at the RTC, lecturer Rabilal Dhakal said it was an open, insightful conversation that gave students a clearer picture about democracy in Bhutan. He said the students found it most useful.

Summary of recommendations and discussions at the conversations:

Role of Media in Democracy