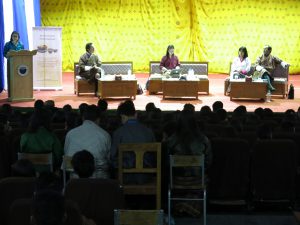 Four speakers – Yangchen Tshogyel, Deputy Governor of the Royal Monetary Authority, The Druk Journal Editor, Dasho Kinley Dorji, and two other writers, Adrian Bernstorff from The Royal Academy and Pema Lama, a consultant, shared with the faculty members and students, thoughts from their articles in the issue, “Transforming Bhutan’s Economy”.

Yangchen Tshogyel spoke on the Priority Sector Lending initiative and on Cottage and Small Industries. She explained the Royal Monetary Authority’s strategies to make access to funding easier, funding being the biggest challenge right now for young Bhutanese venturing into business and entrepreneurship. Yangchen Tshogyel said: “While hydropower will remain important but for a more inclusive, resilient, and diversified economy, CSI has huge untapped potential. However, for the CSIs to realise its full potential, a more integrated ecosystem is required.”

Dasho Kinley Dorji spoke on the One-Gewog-One-Product and how far it has fared and challenges such as transportation to market these products in a landlocked country. He encouraged students to rather be enterprising than always think about government jobs, which are getting fewer by the year. “His Majesty The King keeps telling youth to think out-of-the-box so young people should take up the initiative,” Dasho Kinley Dorji said.

Pema Lama shared her thoughts and analysis on women entrepreneurship and some recommendations to create a more conducive environment to encourage women to venture into businesses, particularly CSIs. One of the recommendations was to put in place activities to help women build confidence and identity as entrepreneurs.

The Conversation with the faculty members also covered “democracy”, where faculty members raised the question of being “apolitical” as a serious issue that needs to be discussed openly in order to give more room for debates and discussions to provide more freedom to participate in the electoral process. Some faculty members through their interaction with students found out that disallowing students and faculty members from openly discussing politics has, in fact, proved disadvantageous because some students neither had logical reasoning for voting for a particular candidate nor an understanding about why they were voting.

Thus they called for further deliberations on creating more room for civil servants and students to discuss politics but without actually compromising the need to remain neutral. 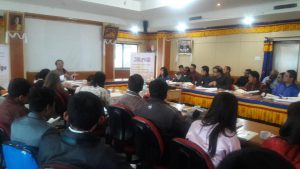 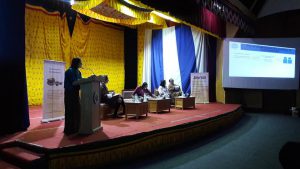 A number of observations, ideas, and recommendations were noted during the conversation and seminar: